On Monday I decided to make a bunny. Actually, Harry (technically, he's a hare). But in the process I found out that there was not enough of yarn in the shade I wanted. What was I to do? Make a new pattern, of course. That's how Bunny McCarrots was born. Unfortunately, all pictures were taken at 1:30 a.m., and the next morning he left for Illinois. So, we currently have what we have. 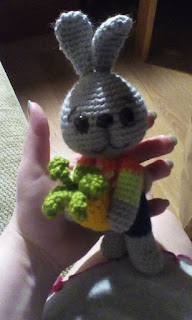 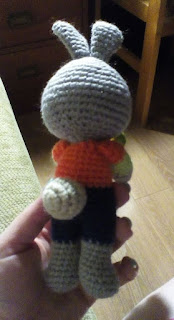 Front and back with a big fluffy tail (not really fluffy, though). The pattern for the carrot he holds in his paws can be found on this blog. 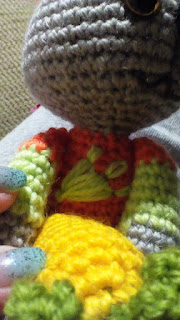 His shirt is my tribute to Dr Sheldon Cooper. I even attempted to make a superhero carrot embroidery, but the carrot looks like a rocket :)

He got a compliment from my mother who said that he's my first really CUTE amigurumi (she considers all others goofy and weird).

The pattern is on its way with, I hope, embroidered and crocheted options for the nose and eyes (sounds as if someone else is going to do it, huh).
Автор: Unknown на 12:24:00