Ok... Right... I didn't make it in time for the competition. That's the sad truth. The "parent" animal is still armless, handless, tailless and noseless. However, he will be useful for some other project I have in mind. His feet look ridiculously different in size and shape, though I used the same yarn, pattern and hook. And I don't like the way I crocheted the top of the body. I actually drafted the patterns (and wrote the tutorials) for basic anthropomorphic bodies several years ago, but still haven't put them into a decent form. So, based on these patterns, the arms should've been crocheted together with the body, but I was rushing and willing to save time. That was a bad idea. Poor guy. Too shy to show up in the current state.. Won't be embarassing him. Well, I plan to re-crochet his body during the New Year holidays. As part of my New Year's Resolutions. Another part implies that all WIP should be either finished this coming year, or be unwoven. So, 2 Bugs Bunnies, a minion, Pucca, an elephant and a pony, and a couple of unidentified things are waiting for their fate to be decided.

However, I'm going to finish editting this creature's pattern before New Year to cross it out of my list. It's so much cuter in the real life than in the photos.. 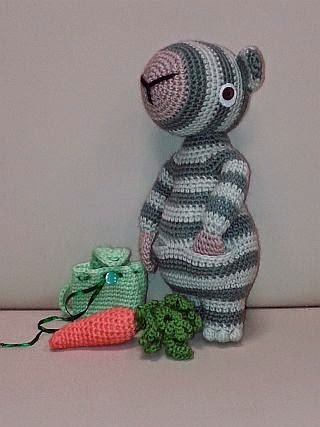